Objects on a FileMaker layout can be grouped to make it easier to move them around and to maintain relative positions of components.

To group a set of objects, select multiple objects and choose Arrange > Group (Cmd/Ctrl-R). The group can be selected with a single click.

To ungroup, select the group and choose Arrange > Ungroup (Cmd/Ctrl-Shift-R). 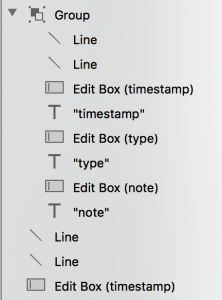 As with all objects, the group can be given a name (rather than the default “Group”). Do this by right-clicking the name and choosing Specify Object Name.

Items in a group may be dragged up and down (changing their z-order or stacking order). But objects cannot be dragged in or out of a group.

Working with objects in a group

In FileMaker Pro 16, it is possible to select an object inside a group on the Layout Objects panel, and then:

Multiple objects within the group can be selected in the Layout Objects panel using Cmd/Ctrl-click.

This was a big step forward in FileMaker 16 with the new Layout Objects panel. In previous versions, there was no access to objects in a group – the group had to be ungrouped, edited and then re-grouped.

In FileMaker Pro 17, individual object access has been made easier. While you can still select an object through the Objects tab, you can also directly select an object in a group. Simply click to select the group, and then click the object. There is a dashed line to indicate the group. Multiple objects in the group can be selected.

Also in FileMaker Pro 17, when an object in a group is selected, it can be both resized and repositioned. If it is moved outside of the existing dashed line bounds, the group is enlarged. Effectively, options on the Position tab of the Inspector have been provided for selected group objects.

These new features in FileMaker 17 makes it much easier and quicker to work with objects in a group. No more Ungroup – Edit – Group.

And a subtle change…

When selecting objects in the Objects tab in FileMaker Pro 17, there is a light grey highlight as you hover over the object, and then a dark grey highlight when you click to select it.

If you select an object directly on the layout, it is selected in the Objects tab with a light grey gradient fill.

Why is this important? It probably isn’t  🙂 Back to work now.